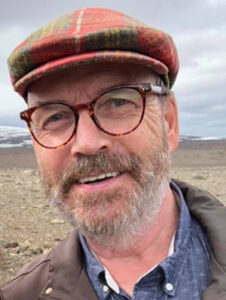 Born in Reykjavik, Iceland, Garibaldi has published seven volumes of poetry since 1983, and translated poetry, short stories and critical works. He holds an MA degree in Comparative Literature from the University of British Columbia, Vancouver, Canada.

Garibaldi has published poetry and short stories in newspapers and magazines, both in Iceland and abroad, along with articles on literature, as well as translations of critical articles and books on literature and literary theory.

A proud father of three children, who now are around thirty years of age, Garibaldi became an acitivist for fahters’ rights around the turn of the century. Subsequently, Garibaldi became known for his sharp spokesmanship for the rights of children and fathers as the chairman of the Icelandic Association of Responsible Fathers, now Foreldrajafnrétti (Equal Parenting). Garibaldi has also done some literary work in that field while fatherhood and his struggles with that role are also important topics in many of his literary works.

Garibaldi’s poetry evokes the road-poetry of the fifties showing his mastery of language and imagery. Dealing with nature and technology, the diversity of city life, and the relationship between people, his poetry frequently originates in his own life, invoking memories and scenes ranging from Vancouver BC to Reykjavik and the Westmann Islands in Iceland. Topics include the death of a sailor in the caboose of a fishing boat, childhood reminiscences, a father working in a fish factory, philosophical wonderings on God and faith, art, love and happiness. His short stories demonstrate great insights into relationships between the sexes, erotic as well as in other respects, while the subject matter varies in nature.

Two of his most recent books of poetry are based on his trip to China (beautiful tiny friends, ornaments of the earth 2019) and on the life story of a man living with violence in his youth and adult life, which ends when he drowns at thirty one ((holy) gusts of hell 2020).

Garibaldi’s manuscript for horizons won a special recognition by the Tomas Gudmundsson Prize in Literature in 2000.

Titles of original works in Icelandic are translated into English.