Garibaldi has published nine books of poetry and for his manuscript horizons he received a special recognition by the Tomas Gudmundsson Prize in Literature in 2000. Garibaldi has also published a volume of translations of poetry from English to Icelandic by authors on both sides of the Atlantic.

Vegferð í myrkri [A Journey through Darkness] (1983) has the bearings of a first book, immature poetry on love and the self.

In sjónhimnur [retinas] (1997) Garibaldi deals with his stay in Canada and his status as a foreigner in an alien culture. In that respect the poems evoke the writings of Icelandic-Canadians in the 19th and 20th century. Allusions to earlier literature, Icelandic as well as from abroad, present a certain tension in these poems.

In sjónbaugar [horizons] (2000) images as a phenomenon gain a larger role along with more play with language and its sounds. The dramatic experience of losing a dear one to the ocean make up a portion of the book while beautiful landscape and time are presented in various poems.

In mátti borgin ekki vera rúðustrikað blað [could the city not be a sheet of graph paper] (2003) Garibaldi calls forth the late female artist, Roska, while the poems are critical of social ills like greed, war and violence, yet giving love and parent–child relationships some room. Three generations in the city enlighten its history and development from a small town into a city with monotonous suburbs.

höfðaborg [CapeTown] (2005) presents images of the author’s family, his children and his father along with his grandparents who lived in the notorious slum CapeTown in Reykjavik, in a cramped apartment which was their reward for managing and running the Workers’ Shelter by the harbour for twenty-five years. The book also contains poems on women, for instance Júlía Jónsdóttir, the Icelandic-Canadian poetess who eked out a living in extreme poverty in Canada and the US, actually for a while not far from the place Garibaldi used to stay for his studies, in Vancouver, Canada. The world is a strange place to most characters in the poems, even in their home places.

órans vængir [orange wings (of madness)] (2006) is a poetic collage of images presenting thoughts and visions which might also be called hallucinations, imaginations unconnected to conventional reality. The poems also show how society used to isolate those called mentally disturbed, but also the violent way society treats artists not conforming to traditional staples.

drengmóður [a boy’s enthusiasm] (2007) is a further treatment of the poet’s childhood evoking old places where the city meets the country-side, not least in the vicinity of Elliðaár-river and the lava between Reykjavík and Hafnarfjörður town.

Blóð á striga [Blood on Canvas] (2008) is entirely made up of translations of poems from English, from William Wordswoth through Allen Ginsberg and Natasha Le Bel.

smávinir fagir foldarskart [beautiful tiny friends, ornaments of the earth] (2019) is about China, and its people, history and culture as experienced by Garibaldi on his visit to Guangzhou in 2007. The poems describe some marvellous places while giving glimpses of a family’s history for three generations as well as discussing Mao Zedong and his legacy. 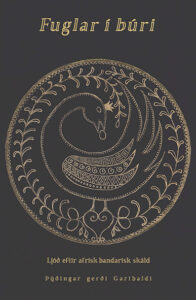 Caged Birds. African-American Poetry [Fuglar í búri. Ljóð eftir afrísk-bandarísk skáld] was published in 2021. The book contains Garibaldi’s translations of 68 poems by 31 black poets and one folk ballad about the signifying monkey. Most of the poets have gained great recognition and even international fame.

Caged Birds presents poetic insights into the battle of African-American people against white supremacy, racism, and enslavement, both before the Civil Was and no less in our time.

Garibaldi translated the poems and wrote an extensive “Epilogue” as well as “Annotations” and “Introduction” to each poet.

Buy a copy here, or from Penninn, or Bókabúð Forlagsins. 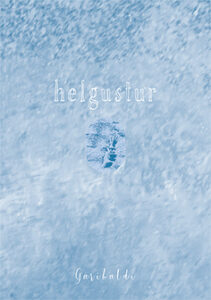 (holy) gusts of hell [helgustur] was publishe in 2020. It tells the life story of a man who runs astray as a child and is sent to the country side where he suffers many kinds of violence. His mind becomes disturbed by the manifaceted violence, making his notions of sexual relationship and life in general confused. 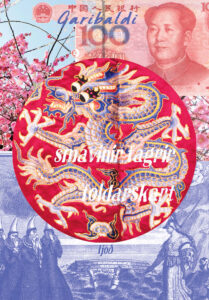 beautiful tiny friends, ornaments of the earth [smávinir fagrir foldarskart] was published in 2019. The poems are about China, and its people, history and culture. The book’s title stems from a poem by the Icelandic poet Jónas Hallgrímsson (1807-1845), in which Eggert Ólafsson (1726-1768), one of Iceland’s founding fathers and foremoust poets, speaks the words, describing small plants as ornaments of Iceland. Now Mao Zedong has a simalar status in Chinese culture and history. The poems are very critical of the situation in this vas and rich country built on capitalism as well as communism, which has provided its people with great opportunities economically while smothering their freedom of speech and human rights. The poems also demonstrate great similarities between the peoples of China and Iceland. 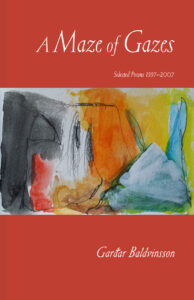 A Maze of Gazes. Selected Poems 1997-2007 was published in 2017.  is a selection of auto-translations of Garibaldi’s poetry from sjónhimnur (retinas) 1997 to drengmóður (A Boy’s Enthusiasm) 2007. The collection demonstrates a variety of Garibaldi’s vision on life, nature, the city, the family, the roles of father and son, as well as on poetry. His mastery of language and imagery appears here in the English language.
Image on front cover: Helgi Örn Helgason, ”Water colours no 11“ from Moleskine Serie VIII

Photograph on back cover courtesy of Baldvin Baldvinsson. 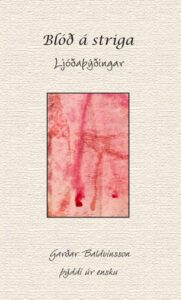 Blóð á striga [Blood on Canvas] of 2008 is a collection of translations by English and American poets, and one from Ireland. The selection is an attempt at demonstrating how phenomena like technology, cities and their planning take on forms of nature, almost metamorphosing into images of nature, even as in one poem when attempts are made to squease the curvy body of a woman into a square box. Some of the authors are still alive while others are gone, some world-famous, some less.

The poet’s brother, Baldvin Baldvinsson, made the image on the cover. 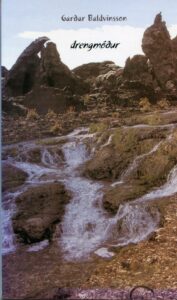 drengmóður [a boy’ enthusiasm] was published in 2007. The poet reminisces about his childhood, with images of Reykajvík, especially of the borders of the city and the country-side, of the din and tranquility, but also the dangers of waterfalls and the lava. Christian faith is more voluminous than before. Some poems also deal with contemporary events like the space-race, landing on the moon and the murders of legendary persons. Garibaldi designed the cover himself with his own photos. 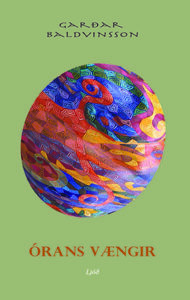 órans vængir [orange wings (of madness)] was published in 2006.  The sixth book of poetry by Garibaldi it also shows his mastery of language and poetic imagery. Its subject matter are among other things the ships of fools, orange wings of madness, art, desire and love, evoking many events in contemporary history.

Garibaldi made the cover image from a photo of a statue of a bull in Fargo, Minnesota, US. 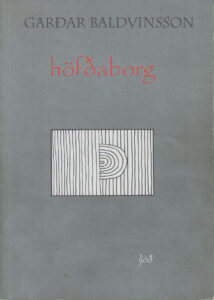 höfðaborg [CapeTown] was published in 2005. Along with original poems the book also contains a translation of the long poem, Ghost Sickness, by the American writer, Luis Alberto Urrea, first published in 1996. Garibaldi’s poems portray members of his family, his father, grandfather, children and brother, along with poems on various subjects.

Garibaldi’s friend, the artist Helgi Örn Helgason, made the drawings on the cover and inside the book. 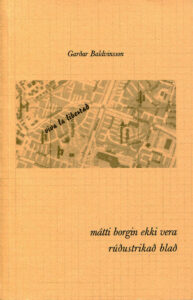 mátti borgin ekki vera rúðustrikað blað [could the city not be a sheet of graph paper] was publieshed in 2003. Weaving together the poet’s memories with material from the life of the female artist Roska, who is addressed in almost every single poem. This part stems from material in the book Róska, published in 2000, on the life and art and political activities of Roska. 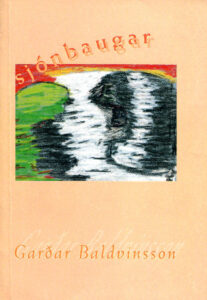 sjónbaugar [horizons] was published in 2000. The manuscript received a Special Recognition of the Tomas Gudmundsson Prize in Literature in 2000. In five chapters the poems deal with Canadian and Icelandic landscape, time and death, relationships with other people, sexuality and alienation. 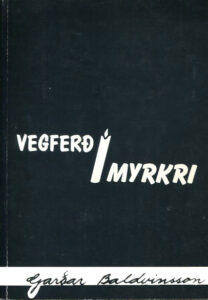 Vegferð í myrkri [A Journey through Darkness] is my first book of poetry (and first book for that matter), published in 1983. It bears the insignia of being my first book, its imagery and subject matter quite immature. It deals mostly with the poet’s dark childhood.